The Beechworth Surgery (the Surgery) is the only medical clinic in Beechworth. It has 10 doctors and offers associated allied health and pathology services. About 70% of its patients are concession card holders.

With the federal government’s Medicare Rebate Freeze affecting the income of medical practices since 2014, the Surgery made the decision to introduce a fee for concession card holders effective in February 2017.

As part of this difficult decision, the Surgery drafted a Fee Policy to support patients who would experience hardship as a result of the change.

"Birgit brought an independent and critical eye to the task, which added significant value. Her experience in managing a significant consultation campaign was evident in the highly-organised planning and delivery."

The Surgery made the decision to introduce the fee but did not have the skills in-house to communicate the change to its most vulnerable patients or to consult patients about the Fee Policy.

Practice Manager, John McColl said he was very concerned for the welfare of concession card patients.

“We knew we had to make the change to ensure the practice and services we offer were sustainable and could continue into the future.

The challenge was to appropriately engage the patients, provide them with information to understand the change, the reasons for it and to get their input into the Fee Policy.

Fishbowl PR developed the communication and engagement plan for the Surgery, giving consideration to the preferred means of communicating with the clients, especially those who were older, potentially suffering with poor health and financially stressed.

In line with the IAP2 (International Association for Public Participation) principles, the plan informed patients of the change (the new fee) and consulted them about the policy; as patients had a genuine opportunity to shape the policy.

We invited patients to review a draft Fee Policy, especially the hardship provisions, to check it addressed their concerns and circumstances. This invitation was sent via text message to those who had registered their phone numbers as their preferred means of contact and others received a letter.

Fishbowl PR also managed the implementation of the communication plan, including preparing all the communication materials for the letters, texts, website, newsletter, waiting room electronic display board and survey.

Campaign results:
220 patients responded to the survey and as a result of their suggestions, the Surgery’s fee policy was changed and introduced with little disruption. 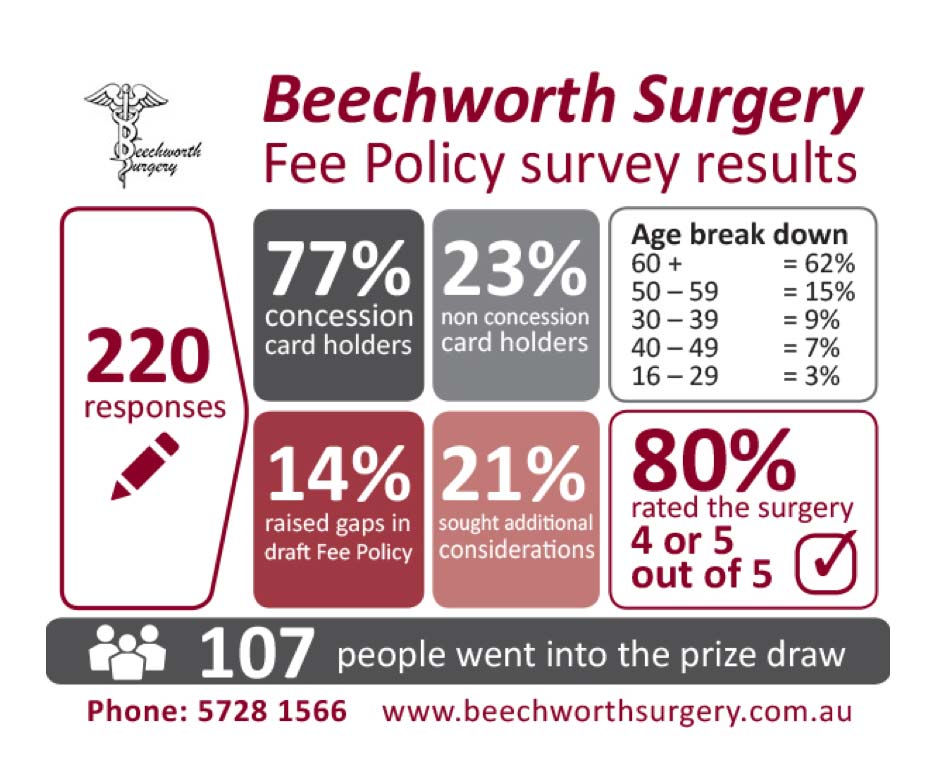 The new fee and policy were introduced on 1 February 2017 and by the end of February the Surgery had 15 applications for consideration under the hardship provisions.

The fee has been discussed by patients attending the Surgery, with most well aware of the fee and several referencing the policy.

Outcome for the Surgery

It was expected the introduction of the fee would lead to a loss of business. However, in the first two months, patients number were consistent with the same time last year. This is considered an excellent result given other practices in the region experienced a 20% decline in the early months after this type of change.

The consultation also received regional media coverage (ABC Radio) and the federal MP, Cathy McGowan asked for the survey results so they could be referenced in Canberra regarding the government’s Medicare Rebate Freeze debate.

“It’s hard for me to regard it as a success when we’re asking pensioners and vulnerable members of the community to pay more, but in the circumstances, I think we can say the implementation has gone very smoothly and caused them minimal additional stress,” Mr McColl said.